The NEFF ball screw range conforms to DIN 69051 and to the NEFF standard.

Ball screw drives are available standard end machining or with customer-specific end machining.
Thanks to the low rolling friction and the suppressed breakaway torque a high mechanical efficiency < 98 % is realized and the required drive power is reduced.
Based on the continual development of the ball track profiles and the ball nut deflection systems, the NEFF Ball screws stand for exceptional high quality and life time.

Ball screws have become indispensable in many industrial environments. They are also called rolling screw drives with balls or rolling elements. Amongst other things, they convert rotational movements into precise linear movements or vice versa and are therefore often used as drive elements for linear movements wherein the screw is usually driven while the nut is connected to the part to be moved.

HOW DO BALL SCREWS WORK?

In a ball screw, the balls inside the nut ensure particularly low-friction movement by transmitting the force evenly between the screw and the nut. These balls move between the screw and the ball nut. In the standard version, the ball screw is not preloaded, thus combining precision with a long service life. The precision can be further increased by preloading the nut on the screw, maximizing precision and travel accuracy. Once the balls reach the end of the nut, they are returned to the other end via a recirculation system. The recirculation ensures smooth movement of the nut even at high load capacities, because the load is distributed over a large number of balls.

These properties make ball screws the perfect candidates for precise linear drive movements. With high repeat accuracy, they ensure precise and fast positioning. Ball screws can also be used in systems with multiple screw drives, where the power transmission and motion conversion of two parallel systems are realised together.

Ball screws are also increasingly used to act as a substitute for hydraulic systems, such as servo-assisted steering, presses, or injection moulding machines.

The biggest difference between these two screw drives is probably their type of friction: In ball screws, rolling friction prevails, whereas classic trapezoidal screw drives operate mainly with dynamic friction. This results in several advantages when using ball screws:

Another difference is the adjustability of the thrust movement: Ball screws are significantly more precise than trapezoidal screw drives and can be adjusted without backlash or with preload to further increase the repeat accuracy. This makes ball screws particularly suitable for drive technology, CNC technology as well as for modern robotics projects, where they make possible high feed rates with maximum precision under a wide range of loads.

NEFF´s rolled ball screws are characterized by excellent core strength and high surface quality. Thread rolling is a non-cutting cold-forming process and has clear advantages over cutting processes, in particular the homogeneous grain structure and the resulting higher strength.

The permissible speed limit is calculated using the DN value (speed parameter) from the respective tables. This is defi ned by the correlation: DN value = nominal diameter [mm] * speed [min¯¹]. The speed limit stands for the maximum speed which may only be run under optimal operating conditions of all components.

The position in which the screw drive is installed can always be freely chosen. Please consider that all occuring radial forces need to be absorbed by external guides.

Accuracy classes of the spindles:

Ball screw drives are generally not self-locking due to the low rolling riction. It is therefore advisable to install suitable motors with holding brake, particularly when the ball screw drive is installed vertically.

The ball screw drive permits a duty cycle of up to 100%. Extremely high loads in combination with long duty cycles can shorten the service life.

All screw drives are designed for continuous operation at ambient temperatures of –20°C up to 80°C. Please contact our sales team for temperatures outside this range.

In general, fl anged ball nuts and cylindrical nuts can be used for applications that are backlash-free or preloaded in an O-arrangement when a ball screw drive with pitch accuracy T3 or T5 is selected.

In case of preloading in an O-arrangement, the lines of force run in a rhomboid pattern. That means the nuts are pushed apart by a specially designed preload ring. The preload is max. 5% of the dynamic load rating Cdyn. If the preload is greater than 2%, we recommend the accuracy class of T5.

Preloading with four points of contact allows to forgo a second nut and the preload ring. Ball selection in the μm range reduces the clearance to the desired value or to a preload of up to 2% of the basic dynamic load rating.

The repeat accuracy is defi ned as the ability of a screw drive to reach an actual position that has been reached before under the same conditions. It refers to the average positional scatter according to VDI/ DGQ 3441. Repeatability is infl uenced, amongst other things, by:

In cases of heavy dirt and fi ne dust particles/swarf, an additional bellows cover or a spiral spring cover is recommended. Special ball screw drives which are resistant to corrosion are availaible on request.

If an increased reliability and a limitation of economical loss are of higher interest, safety nuts are the right choice. The appropriate safety nut is designed according to its technical requirements.

We supply ball screw drives with low backlash with axial play of max. 0.02mm or with preload.

In the case of recirculation with defl ectors, the balls are lifted out of the spindle after each rotation and set back by one thread (only for single-start ball screw drives).

With this type of recirculation, the balls are steered into a return channel by a defl ector after several rotations and are then fed back into the spindle (for single-start and multi-start ball screw drives).

In the case of end cap recirculation, the balls are steered into the return channel by special end caps and then fed back into the spindle (for multi-start ball screw drives).

NEFF ball screw drives achieve a long service life under the prescribed lubrication cycles. We recommend the use of NEFF Grease 2/3, a lubricant specifi cally developed for ball screw applications.

Our standard product range includes rolled ball screws. On top of that, we deliver ground or whirled ball screws. During the rolling process, the thread grooves are rolled in with a cold working method. This leads to high material strength and surface quality. The gothic pointed profi le with a contact angle of 45° and an optimised osculation guarantees for ideal operating characteristics and high load capacities. This also allows for high effi ciency. From raw material tailored to our specifi cations, to thread rolling and inductive hardening, to the fi nal fi nishing, NEFF’s manufacturing process ensures a consistent high quality of our ball screws. The ball screws in stock range from Ø12 to Ø80 with pitches up to 60 mm. Thread profi les with up to six threads guarantee high load ratings. guaranteed. The standard pitch variation corresponds to tolerance grade T7 (52 µm/300 mm). Thanks to the seamless process chain in the spindle production, we are able to deliver spindles with an accuracy of tolerance grade T3 (12 µm/300 mm).

The wide range of flanged ball nuts allows for a variaty of different connectivity options for diverse applications. The flanged ball nuts are available from stock either with a flattened flange for limited mounting space according to DIN 69051 or as type KGF-N in accordance with the widespread NEFF standard.

Special flanges or the further processing of standard nuts for customer-specific needs can be developed in accordance with drawings.

A flanged ball nut unit preloaded without clearance consists of a flanged nut and a cylindrical nut. It is available either in accordance with the NEFF standard or the DIN standard. The preload is at the maximum 5% of the dynamic load rating Cdyn. If the preloaded is more than 2% we recommend the pitch accuracy T5. This type is characterised by a very high stiffness.

NEFF cylindrical ball nuts are highly suited for the use in housing bores because of the compact construction and the integrated feather key groove. The design of the series KGM-N in accordance with the NEFF standard is particularly robust.

Cylindrical ball nut units preloaded without clearance consist of two cylindrical ball nuts. These units are either available in accordance with the NEFF standard or with the DIN standard. The preload is at the maximum 5% of the dynamic load rating Cdyn. If the preloading is more than 2% we recommend the pitch accuracy T5. This type is characerised by a very high stiffness.

Thanks to the screw-in thread, the ball nut can be axially fixed. On top of that, the KGM-E series can be used for applications with a piston tube connection, for example as a drive element for electric cylinders. 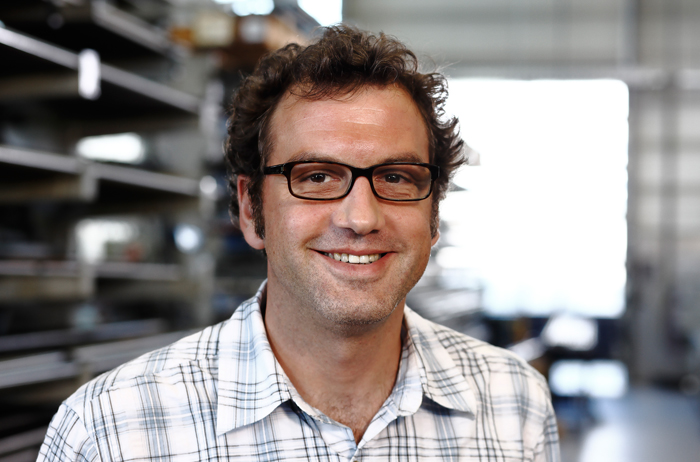